Mike Bloomberg started as a middle class kid who worked his way through college. After getting laid off at age 39, he started a company from scratch and built it into a business that today employs 20,000 people. He gives virtually all of the company’s profits to charity, to support causes he is passionate about, including gun safety, climate change, education, women’s rights, and health care. He served three terms as Mayor of New York and created nearly a half-million jobs, expanded health insurance to 700,000 people, reduced the city’s carbon footprint, and cut the incarceration rate by nearly 40%. Now he’s running to unite America, defeat Donald Trump, and start getting big things done.

One of Mike Bloomberg’s earliest memories took place around his family’s dining room table in Medford, Massachusetts. His father – a bookkeeper at a local dairy who never earned more than $6,000 a year in his life – sat down and wrote out a $25 or $50 check to the NAACP. When Mike asked him why, his father responded: “Because discrimination against anyone is a threat to everyone.” With that simple act and that simple explanation, Mike’s father taught him one of his most important lessons: We’re all in this together – and if you have an opportunity to help, you have an obligation to act.

The sense of duty and common purpose that he first learned from his father has guided Mike Bloomberg throughout his life and career as an entrepreneur, philanthropist, and job creator who served as mayor of New York City for 12 years.

It’s what led him to become one of America’s most fearless and effective voices on urgent issues including climate change, gun violence, public health, and education. It’s why he has given $10 billion to support vital causes in the U.S. and around the world, and why he has pledged to give away nearly all of his money in his lifetime. And it’s what compels him today to run for president of the United States.

Mike understands the unprecedented risks we face from President Trump and what it will take to get our country back on track. Donald Trump is a failed businessman whose companies went bankrupt multiple times and who built a presidential campaign around empty promises, and his reckless actions in office have harmed Americans and weakened our country. Mike Bloomberg built one of the world’s most successful companies from scratch and guided America’s largest city to new heights after the attacks of 9/11 and through the shocks of the global economic crisis.

Mike is a proven leader with an unmatched track record in business and government. He can unite the Democratic Party, bridge partisan differences, and get Washington back to solving problems – and getting the big things done for Americans.

Mike Bloomberg grew up in a middle-class family outside of Boston. He wasn’t born into wealth or social connections. His drive to succeed, love of work, and passion for service began at a young age. When he was 12 years old he became one of the youngest Eagle Scouts in history. To help pay his way through Johns Hopkins University, he worked in a parking lot and took out government loans.

His father died when he was in college and his mother worked as a secretary. After working his way through college and Harvard Business School, Mike then took an entry-level job with a financial services firm and worked his way up to partner, eventually overseeing its technology and information systems.

And then, one day in 1981, he was laid off. It turned out to be a moment that would define the rest of his life.

The next day, Mike decided to start his own company, beginning in a one-room office with a groundbreaking idea far ahead of its time: a desktop computer that connected investors to a vast network of information and data. If Mike’s new business could distribute that information widely, it would democratize financial information, empowering investors and smaller firms and result in dramatically improved returns for pensioners and retirees.

People told him it was a waste of time and that his idea would never work. But Mike believed in the idea and worked long days and nights. Today, Bloomberg LP employs some 20,000 talented and creative people who share Mike’s passion for innovation and customer service.

In 2001, just weeks after the terrorist attacks of 9/11, Mike Bloomberg was elected mayor of New York City in his first run for public office.

Mike and his team rallied New Yorkers and led the city through a new era of progress and prosperity – writing one of the great comeback stories in American history.

And when the global economic crisis hit New York City in 2007, the investments Mike and his team had made helped hold the city together. From the end of the national recession through 2013, New York City gained back 327% of the jobs lost, while the country as a whole gained back only 87%.

By the end of his mayoralty, New York City was safer, stronger and healthier than ever.

Since leaving City Hall, Mike has continued to build on the work he began as mayor, and he has shared his results-oriented approach to management with other mayors around the country. Through Bloomberg Philanthropies, Mike has worked to increase the number of low- and middle-income students who attend top colleges. As a demonstration of that commitment – and to encourage others to join him – Mike gave $1.8 billion to his alma mater Johns Hopkins to forever guarantee need-blind admissions for all students.

He has also taken the fight to the NRA and helped pass commonsense gun laws that save lives in states around the country. And he has led the charge against climate change. His partnership with the Sierra Club has shut down more than half the nation’s coal-fired power plants and replaced many of them with clean energy, saving many lives and creating many new jobs.

For Mike Bloomberg, the sense of responsibility to others – first instilled in him by his parents around the kitchen table – is stronger than ever.

Every single day he wakes up and thinks about what he can do to create a healthier, safer, more just world – for his two daughters, Emma and Georgina, for his two grandchildren, Zelda and Jasper, and for all Americans. 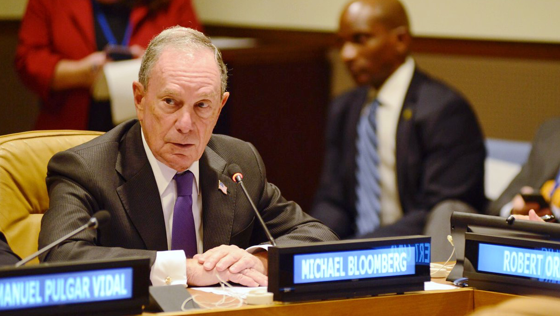 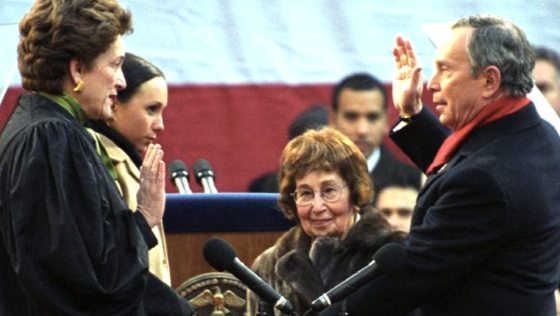