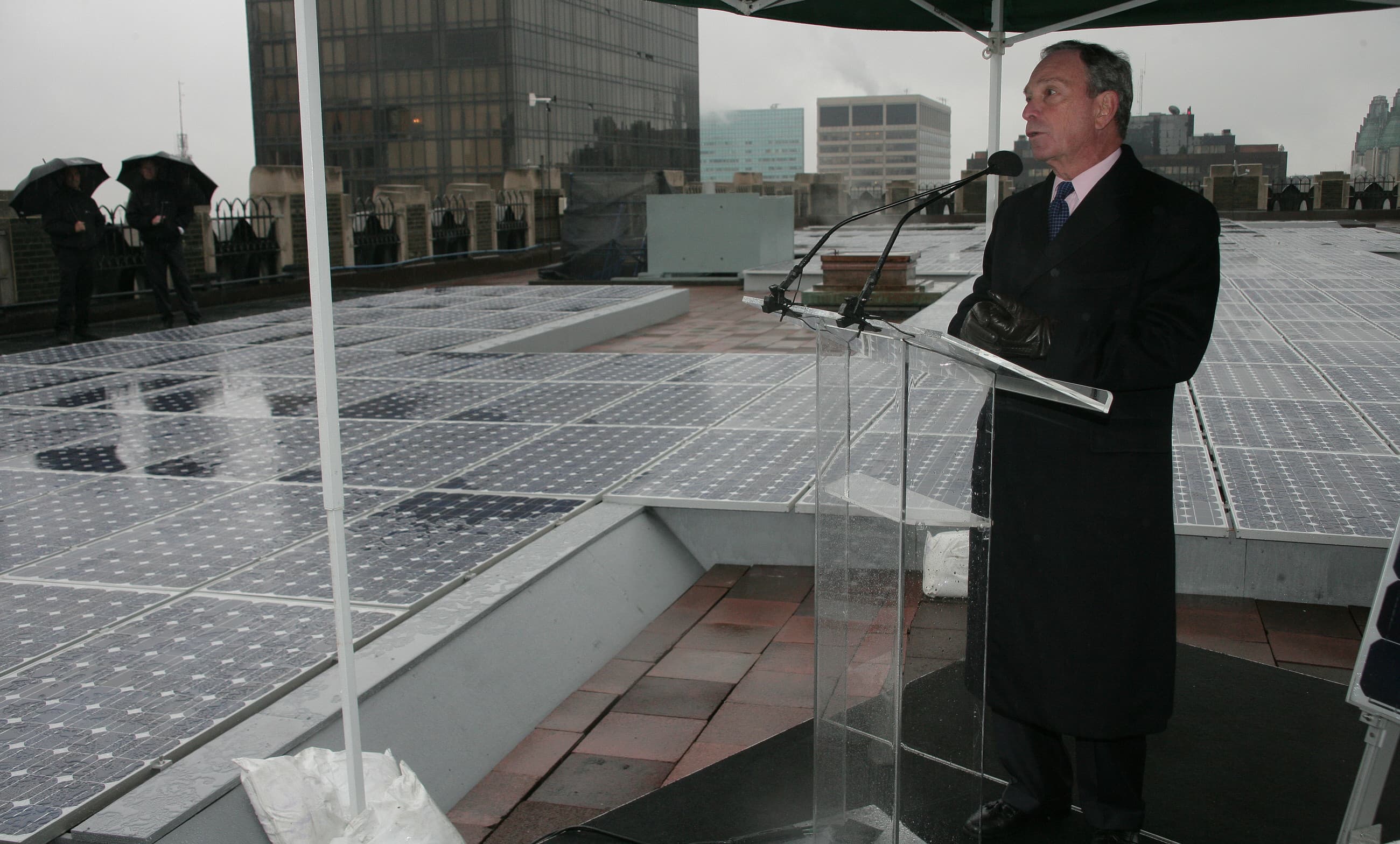 In 2016, I visited Spartanburg, South Carolina, a textile town in the American South. Spartanburg is steeped in tradition and rich with history; this past year, it also became a home for innovative and community-based public art. By installing digital screens with poetry along hiking trails, shining brilliant lights on the façades of historic smokestacks, and creating kaleidoscopes of color in unexpected corners of the city, world-renowned artist Erwin Redl worked with neighborhoods to transform public spaces in ways that made “Sparkle City” shine.

Spartanburg was one of four winners in Bloomberg Philanthropies’ first Public Art Challenge—a competition that brought mayors and artists together to tackle their communities’ thorniest challenges. The art in Spartanburg was designed not only to be beautiful, but also to start conversations and foster closer relations between police officers and residents. The project would never have happened without the strong support of the local government, including the mayor and the police chief.

Spartanburg is a great example of the goal we set last year for all of our programs at Bloomberg Philanthropies: strengthening our efforts to assist governments around the world. Cities are at the center of this work because our mission is to ensure better, longer lives for the greatest number of people, and the majority of the world’s population live in cities. By 2050, some 70% will be urban dwellers.

We strongly believe that by enlisting and empowering mayors and local officials, we can multiply our impact. We have found that the most complex global challenges—whether fighting the causes of climate change, improving public health outcomes, or strengthening community-police relations—are often best approached with local solutions. It’s a strategy that has proven to be powerful time and again in cities like Spartanburg and around the world.

Our work focuses on five key areas: the arts, education, the environment, government innovation, and public health. In each program area, we seek challenges overlooked by others, and we work with partners to follow the data and advocate for proven solutions.

Over the past year, Bloomberg Philanthropies formed a number of new partnerships to advance our mission in new ways:

Building on our partnership with Johns Hopkins University, we launched the $300 million Bloomberg American Health Initiative. Its goal is to find solutions to U.S. public health challenges through enhanced research, endowed professorships, and new academic programs, including a Doctorate in Public Health and a Master of Public Health fellowship. These efforts focus on fighting the challenges of drug addiction, obesity, gun violence, adolescent health problems, and environmental threats—all of which have contributed to the first decline in average American life expectancy since 1993.

Furthering our support of mayors across the world, we formed a partnership with Harvard University to establish a new $32 million leadership training program. This collaboration to advance leadership, management, and innovation will equip mayors and their senior staff with the tools, skills, and support increasingly required to tackle the complex challenges faced in governing cities.

Reflecting the deep impact that the institution had on Mike’s passion for science and problem-solving, we funded a $50 million endowment for the education center at the Museum of Science in Boston, naming it after his parents, William and Charlotte Bloomberg. This center will further the museum’s work of sparking lifelong curiosity about science—and, perhaps, even inspire the next Mike Bloomberg.

In addition to launching these new efforts, we made great progress in areas where we have already been hard at work:

Over the past year, our long-term global initiative to curb tobacco use continued to bear fruit: cities in China, such as Shanghai and Shenzhen, fully implemented smoke-free laws with Bloomberg Philanthropies’ advice—helping to improve the lives of tens of millions. And in Uruguay, with our support, the government won a landmark international legal battle that involved protecting its tough anti-smoking efforts from interference by the tobacco industry. Additionally, we have seen a decline in global cigarette sales: 220 billion fewer cigarettes were sold in 2015 than in 2012. In the past ten years, our fight to reduce tobacco use has helped to save 30 million lives.

After the proven success of taxes on sugary beverages in Mexico, Mike Bloomberg supported advocacy campaigns to spread similar policies in U.S. cities. As he noted in his letter (and it’s worth repeating): seven U.S. cities and counties have adopted soda taxes over the past two years.

This past year, our work in more than 420 cities across the globe was strengthened. Bloomberg Associates, our international philanthropic consulting firm for city governments, provided deep expertise and advice to mayors and their teams, including to five new select cities. And our Government Innovation team’s Mayors Challenge ran its third regional competition, this time in Latin America and the Caribbean. The contest encourages cities to propose bold new solutions to urban challenges that improve city life and have the potential to spread to other cities around world. The 2016 grand prize winner, São Paulo, put forward an innovative approach to connect farmers to urban markets.

Through our Women’s Economic Development program, we helped connect more female entrepreneurs to markets around the world: coffee grown and produced by partners in Rwanda is now sold at the Marriott hotel in the capital city of Kigali and will be served on RwandAir flights across Africa, Europe, and the Middle East
Furthering our fight to curb the effects of climate change, Bloomberg Philanthropies formed a partnership with the European Union to create the Global Covenant of Mayors for Climate & Energy, uniting more than 7,400 cities from 121 countries in efforts to reduce carbon emissions and adapt to climate change. Through these cities’ public commitments and their collective actions, we are building a greener, more resilient future.

Here at home in the United States, we expanded our work to support access to opportunity for all students: we grew CollegePoint, a college access program that uses technology to connect talented lower-income students with advisors. We have already reached more than 21,000 students. In addition, we built a growing coalition of almost 70 university presidents willing to work to increase the number of high-achieving, lower-income students who graduate from their schools. And in several cities across the country, we backed innovative pilot programs focused on career and technical education, collaborating with businesses to ensure that young people, even those who do not go to college, have the skills to get good jobs.

Our fight for a cleaner, healthier America continued. The Beyond Coal campaign recently hit a major milestone. Our initial goal was to close a third of the 523 U.S. coal-fired power plants that were in operation when we began. Today, more than 250 coal-fired power plants have been retired or have committed to retire thanks to grassroots efforts across the country— far exceeding our goal. Beyond Coal has been called one of the most effective environmental campaigns in history.

At Bloomberg L.P., employees advanced the company’s tradition of serving local communities begun 35 years ago. In 2016, more than 11,000 employees contributed over 128,000 volunteer hours in cities around the world.

Last year, Mike Bloomberg and I went to Mexico City for a meeting of city leaders who were showcasing ingenious ideas being implemented around the world. At a local school we visited, we saw children, no older than 10, drinking clean water from new drinking fountains. These fountains (as seen on the cover) had been recently installed using funds from Mexico’s sugary beverage tax, a law we supported. In that moment, I was reminded of the simplicity—and the power—of our work.

Finally, I have two recommendations for the year ahead: a book to read and a film to see. (Although, I have to admit, I am a little biased.)

Climate of Hope is a new book about how to fight climate change by Mike Bloomberg and Carl Pope.

Climate of Hope, written by Mike Bloomberg and Carl Pope, the former executive director of the Sierra Club, showcases the incredible work of local communities in combatting climate change around the world and points a hopeful way forward for us all. In addition, a new documentary, From the Ashes, looks at the future of coal in America and at what’s at stake for our economy, health, and climate. The film was directed by Michael Bonfiglio and produced by RadicalMedia in partnership with Bloomberg Philanthropies. With this book and film, we hope to broaden the conversation about practical solutions to fight climate change, enlisting people from all walks of life and from across the globe.

Thank you for taking the time to read and learn about our efforts, both new and long-standing, in this year’s annual report.

To learn more about Bloomberg Philanthropies work over the last year, read the Annual Report, available on Bloomberg.org.