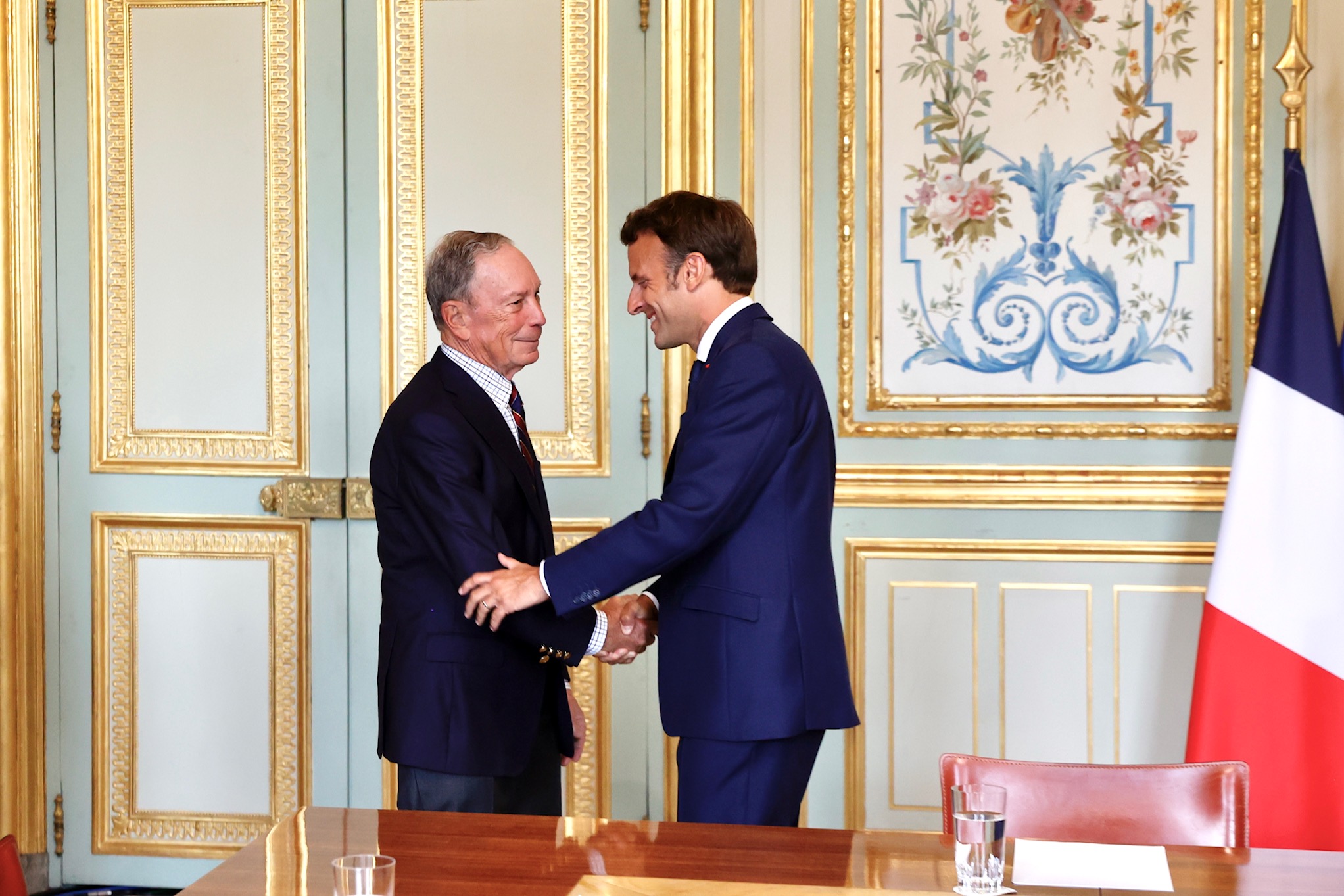 Following President Macron’s announcement of a One Planet Data Hub, and the announcement of the Glasgow Financial Alliance for Net Zero, co-chaired by Mike Bloomberg, this new Climate Data Steering Committee brings together global organisations, regulators, policy makers and private sector leaders, who will present findings in September during the United Nations General Assembly.

Paris, France – Following a bi-lateral meeting at the Elysée Palace today, President Emmanuel Macron and Michael R. Bloomberg, UN Special Envoy for Climate Ambition and Solutions, announced a global effort to enhance transparency to monitor business climate actions and commitments in the global fight against climate change. A new Climate Data Steering Committee will bring together international organizations, regulators, policy makers and data service providers to advise on the creation and design of an open-data public platform that will collect, aggregate, and standardize net-zero climate transition data based on private sector climate commitments.

Today, the net-zero commitments made by the private sector, and the underlying data driving them, are not reported consistently. Most of the existing data platforms are inaccessible to the public, and none are comprehensive, preventing regulators, investors, and other stakeholders from evaluating business and financial institutions on their material climate risk and progress toward net zero. This lack of standardized, accessible data is limiting the power of markets and the public to fight climate change.

Through a new Climate Data Steering Committee, this global group of public and private sector leaders will advise on the design of a unified global open climate data platform that will be available to the market, regulators, climate scientists and civil society. Better information, accessible by everyone, will help facilitate and scale the transition toward a net-zero global economy. Open data – which is essential for the world to hold businesses and financial institutions accountable for their net-zero commitments – will arm financial institutions with the information they need to develop and execute on their transition plans, giving the world transparency and the ability to hold companies and financial institutions accountable to their commitments to building a net zero economy. The creation of an open-data platform will bring transparency and accountability to the commitments companies and financial institutions have made through UNFCCC’s Race to Zero Business Ambition for 1.5 C and the Glasgow Financial Alliance for Net Zero.

President Macron said: “The transition to a net zero economy is a journey we are engaging through altogether as a society: governments, businesses and citizens. I’m convinced that standards and transparency will be key in this race to zero: standards because this is how we can make sure everyone has the same understanding of actions and commitments, transparency because it incentivises ambition and ensures accountability. These are the ideas behind the One Planet Data Hub which I launched in October last year. This global partnership with UN special envoy for climate Michael Bloomberg intends to help ensure and monitor how the entire private sector is genuinely becoming green and contributing to the net zero ambition.”

President Macron and Mr. Bloomberg’s meeting comes exactly five years after the previous U.S. administration announced that it would withdraw from the Paris Agreement, when they subsequently met in Paris to announce that the U.S. would continue to strive to achieve the Paris Agreement objective through a partnership among American cities, states, and businesses.

“Through the UNFCCC Race to Zero and the Glasgow Financial Alliance for Net Zero, private sector leaders have made bold commitments to tackle climate change, but often find their hands tied by a lack of accurate data. It’s a big problem at the heart of the climate battle, and this partnership will help to fix it,” said Mr. Bloomberg. “Transparent, standardized data will help investors make informed decisions, encourage more companies to disclose their emissions, and allow the public to see which companies are leading the way. It will also make it much harder for companies to ‘greenwash’, or make empty promises that don’t actually cut emissions, by forcing them to back up words with action. France has been a leader on data transparency, and we’re looking forward to working with President Macron to address this challenge and speed up global progress.”

The Steering Committee will consist of individuals from international organizations including the United Nations, the OECD, the Financial Stability Board and the International Monetary Fund; government representatives from both developed and developing countries; leading GFANZ financial data service providers including Bloomberg LP, London Stock Exchange Group, Moody’s, Morningstar, MSCI, and S&P Global. The Committee will also consult with leading non-profit climate data organizations. In September, during the United Nations General Assembly (UNGA), the Climate Data Steering Committee will meet in New York and will deliver a collective design and roadmap for a global open climate data platform to consolidate, standardize and open net zero data by COP27.

Patricia Espinosa, Executive Secretary of the UNFCCC, said: “I welcome President Macron’s and Michael Bloomberg’s support for climate data transparency and the development of a Climate Data Steering Committee. This is critical to help advance both the work of tracking voluntary climate actions and the development and evolution of the UNFCCC Global Climate Action Portal. It is a significant contribution to make commitments by non-Party stakeholders fully transparent. These actions are essential to achieve the 1.5 degree goal under the Paris Agreement.”

Kristalina Georgieva, Managing Director of the IMF, said: “Better data, disclosures and aligned approaches to sustainable finance are critical to ensuring investors and consumers can support companies that are accelerating the transition to net zero. The IMF is deeply committed to strengthening the climate information architecture in the financial sector, and improving the quality, consistency, and comparability of data. We are proud to take part in this new initiative. This project will build on existing and ongoing initiatives taking place at the global level to standardize and make available climate-related data for financial institutions and corporates.”

According to the Secretary General of the OECD Mathias Cormann, “Building on President Macron’s leadership through the One Planet Summit, creating one single data platform represents a fantastic opportunity to hold business accountable to their commitments on climate change. The OECD stands ready to support this initiative and to provide its expertise and analysis to ensure its success.”